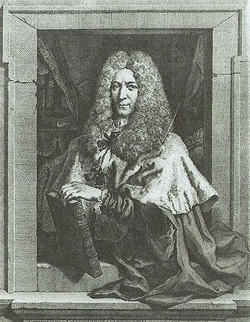 The word Bismuth comes from the German word  Weisse Masse meaning “white mass”, this changed to Wismuth then Bisemutum, from these two names we got Bismuth.
The History of the element Bismuth was never technically confirmed, but many people believe it was found by Claude Geoffroy the Younger in 1753. I know that you are probably thinking that metals cant really be “discovered” because they have always been on the earth but Geoffrey discovered bismuth as its own element. Before Geoffrey, bismuth had been confused with the elements around it like lead (Pb) and Tin (Sn). It is hard to believe that bismuth is a stable element as we can ingest it safely, where as it neighbor on the periodic table (Lead-Pb) is poisonous to humans.
Image:  Claude Geoffory. Digital image. Yatedo. Yatedo.fr, n.d. Web. 27 Oct. 2015. <http://www.yatedo.com/p/Claude+Fran%C3%A7ois+Geoffroy/famous/3bcda159a178c4084a4539227c0e7b3c>.

Bismuth has many compound, including Bismuth Oxychloride- BiClO, Bismuth chloride- BiCl3,   Bismuth hydroxide- Bi(OH)3,  Bi​ calcium copper oxide- BiSrCaCuO. Bismuth Oxychloride is one of the most common to our everyday lives it is used in cosmetics. Because of its white coloring it is used as a pigment in makeup powder. This compound is not polar because when it doesn't need a low melting/freezing point to separate the compound, for this compound it also is insoluble meaning it can’t be dissolved in water making it not polar. The melting point of this compound is 271.3 oC and the boiling point is 1564 oC, its molar mass is 260.43 g/mol-1. However that is not the only compound from Bismuth used in cosmetics; Bismuth hydroxide- Bi(OH)3 is used also. It is a white-yellow amorphous powder. Its molar weight is of 260.002 g/mol-1, it is also insoluble in water. 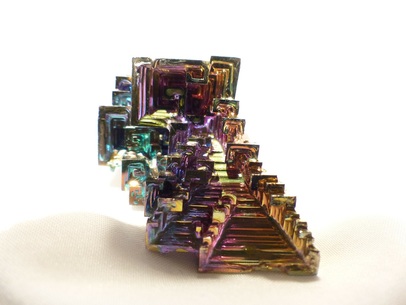 It has been used since ancient times but was often confused with lead and tin.
No specific person was credited toward its discovery. Until Claude Geoffery (see first paragraph) found it as a single element.
It was among the first 10 metals to be discovered.
The reason that Bismuth crystals grow in the staircase shape is because of a greater growth on the outer edges than in the inside.
Is liquid state is denser than its solid state.
One of bismuth's isotopes, Bi-209, was once believed to be the heaviest stable isotope in existence, but it was proven in 2003 that this isotope actually does decay. (soft schools)
Bismuth is around twice as common as gold in the earths crust
Almost 9,000 tons of bismuth are extracted and produced annually.
Almost 75% of the bismuth produced is from China.
Medications, cosmetics, paint, and bullets made of bismuth would currently be impossible to recycle due to technology limitations.
In 2010, the US used less than 900 tons of bismuth, with more than 60% of those uses going to one of the four applications that cannot be recycled.
Beginning in 2014, water systems will be required to be lead-free, and bismuth is currently being studied as a replacement.

Bismuth does not reacts with air at regular temperatures, although as it nears its boiling point it forms a oxide coating and oxidizes. The color of the oxide; a yellowish tint distinguishes it from other metals. A red heat it reacts with steam, but doesn't react with cold or air free water. Overall Bismuth is defiantly one of the less reactive elements.

Kean, Sam. The Disappearing Spoon: And Other True Tales of Madness, Love, and the History of the World from the Periodic Table of the Elements. New York: Little, Brown, 2010. Print.
​
​