Main uses in the Modern World

On the outside Lithium seems like one of the hardest metals, yet it can be cut by a knife easily.  Because it is one of the lightest metals, when it is combined with Aluminum it can be used in airplane parts.  Since it is so light airplanes want to use so there is little weight when flying. So when Lithium is combined with Aluminum which is a sturdy metal it creates the perfect combination for high-performance parts for an airplane.  Also Lithium can be used as a bipolar medicine when combined with carbonate.  Lithium acts on the central nervous system and the spinal cord which controls most of your behavior and actions.  Doctors don't know how it, it exactly works but it is thought to help the nervous system communication in the brain regulating your mood and behavior.  One of the most common uses of Lithium is in batteries.  Lithium is ideal for use in battery applications as it has the highest electric output per unit weight of any battery material.  Lithium ion batteries are slowly becoming one of the most popular batteries because they are some of the best rechargeable batteries.  You can use them to power ipods, iPhones, computers etc. 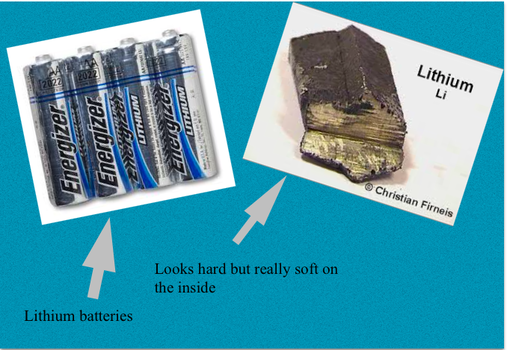 1. Lithium is the only alkali metal that reacts with Nitrogen
2. Lithium is also believed to be one of the 3 elements that was mass produced during the first 3 minutes of the universe's creation (the big bang)
3.  Lithium is coroding, causing skin burns as a result of the burning hydroxide produced in contact with moisture.

Lithium isn't the most popular element on the periodic table of elements unlike gold, silver or oxygen.  Even though it's not the most popular it is abundant in the world.  According to research in 2008 the Lithium count was about 10.6 million tons (that's a lot).  Now in comparison to one of the popular elements like gold, gold only has 165,000 tons on the earth (just take a minute to soak in).  The top 3 producers of Lithium are Australia, Chile and China.  Now those countries are widespread all over the place so lithium isn't produced in just one certain area of the world.  There's one country that isn't mentioned in the chart that also has a major impact on production of Lithium.  Bolivia has a ton of electric cars that run on batteries.  The batteries that they use have lithium in them. Since they have a ton of electric cars that means a ton of batteries which means a ton of Lithium.  This metal is very abundant in sea water and is mined from brines and clay. 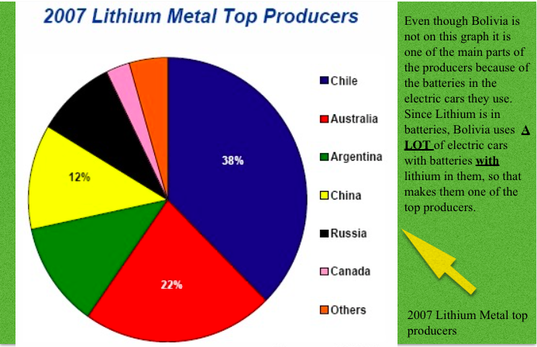